No, I’m not talking about that kind of basket. Get your mind out of the gutter.

If you’re on YouTube or other streaming services and live in NC, you’ve no doubt been inundated with this annoying ad from Rep. Gun Store Owner Ted “I Have My Nose So Far Up Trump’s Wazoo, I Can See Classified Documents” Budd.

This particular version of the ad (which was changed because a local tv station caught Budd using outdated and misleading numbers in the original) has been running for the past week or so. He’s spent around $10,000 to $15,000 for between 1.25 and 1.5 million impressions for it, according to Google’s political ad transparency tool. (The previous version ran around 175.000 times before it was pulled.)

It’s one of those 15 second “impression” ads designed to define Ted’s “brand” and a hot button issue that his image consultants hope you don’t examine too closely.

So, let’s take a closer look, shall we?

“A Tale of Two Carts” main message is equating “Biden” with “inflation”, a common distractor used by the GOP over the past few months. It uses the visual aid of a grocery basket on the right with what we could buy “two years ago” with a cart on the left showing what we can buy “today”.

Let’s zoom in on Rep. Gun Store Owner Ted Budd’s basket. (NO! Not _that_ basket, you pervert, you!!)

What Gun Store Owner Budd’s buying here is pretty interesting. On the right, in the “two years ago” basket, there’s oranges, a gallon of milk, crackers, some packaged pasta, vegetables, a carton of eggs, a loaf of deli bread and a prominent bag of charcoal for the grill. We can’t really see everything, but I think we get the idea.

On the left is the basket showing what we can buy today.

You can see clearly see a list of very oddly specific items: a quart of milk, a smaller loaf of bread, an ear of corn, a half-dozen eggs, a couple of bananas, and a pound of ground beef. There’s also mysterious bottle of what looks like either apple cider vinegar or malt liquor, but we’ll assume it’s apple juice. And there’s a jar of pickled eggs. 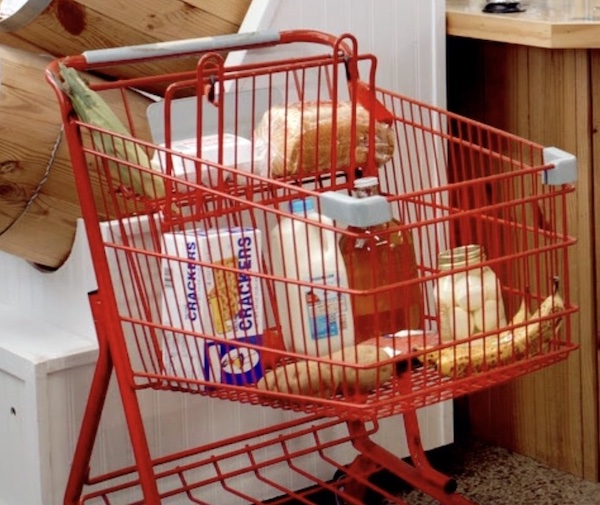 So, how much would Ted’s basket of groceries cost right now? I looked up the prices at my local Food Lion grocery store.

We’re not judging you for your dietary choices here, but that jar of picked eggs is seven bucks, Ted.

I don’t know about you, but the last time I spent $26 on a full cart of groceries for the week was probably 1983. And I wasn’t even buying a big honking’ jar of pickled eggs.

This is a common little trick in these quick tv ads, creating a visual that’s supposed to have impact, but is just misleading and exaggerated. Sorry, I don’t believe that basket full of groceries on the right could have been purchased for $26 two years ago, unless the bulk of what we can't see consists of several large 89 cent cabbages.

“I’m Gun Store Owner Ted Budd and I approve this jar of $7 pickled eggs purchased in a store that is a backdrop for my campaign ad.”

If Budd or Google removes the ad, you can download it here.

Ted Blood’s family business got a $10 million PPP loan which was forgiven 100%. That’s right, $10 million handed to Budd’s family while the rest of us paid the freight.